Overland travel is all about staying in the roughest, most unforgiving environments. Ignoring personal comfort. Shunning the trappings of a tourism. Seeking out discomfort and… no! Wait! Screw it. Today it is all about luxury.

We had spent a less than ideal night at the local RV park. But we still wanted to spend some time in the area. We made several unconvincing excuses to justify a stay in a nice hotel. Muttering things like “won’t get locked out” “working wi-fi” “out of the rain” “closer to town” we made our way in to town to seek out a hotel with space to park. This immediately eliminated a few of the more budget places we had considered. (Oh what a pity…)

It was in this manner that we found ourselves at the front desk of a rather posh looking boutique hotel, pleasantly surprised to find out that their rooms were practically half price for the off-season—breakfast included. No justification necessary. At just under $30 a night, we could absolutely afford to treat ourselves for a night… maybe more!

Emma squealed and danced with delight when she saw all the teeny-tiny soaps and shampoos in the bathroom. Definitely two nights. Yep.

Sure, these colonial buildings aren’t all designed with someone of Ben’s height in mind:

But he can duck, when he remembers. (Spoiler, he didn’t remember enough and lost a number of precious brain cells during our time in San Cristóbal.)

We decided that we were going to make the most of our time in this popular gringo tourist hot spot. We were staying in a nice hotel, now we needed to seek out all of life’s necessities. Craft beer and good coffee. While we were there we planned to jam all the gringo food we could eat into our faces as well. Maybe if there was some time we’d check out some tourist attractions. But first up, beer and coffee.

It just so happened that just across town there was a craft beer bar out the back of a hipster coffee shop. A tasty lunch spot by day and craft beer and burger bar by night.

We stopped for a brunch of coffee and crepes at another cafe (plan “Eat like starving hipsters” was in full swing). When who should we see across the road but Steve and Janette (Tiger 800 Round the World). Who we had very briefly met months earlier in Batopilas in the Copper Canyon. They were equally surprised to see us, it seemed that all the other travellers we had all met were moving a lot faster than the four of us.

They had been staying in town attending Spanish classes and had just popped out for a brief visit to the grocery store which then turned in to several hours chatting about adventures, travel, Mexico and life in general.

We made plans to meet them later in the week once their classes were over. But accidentally got our dates wrong and ended up having to book one more night at the hotel.

So four nights it is.

This left us with plenty of time to explore the town. Most of which we wasted inside coffee shops and craft beer bars. But we did take the time to check out some of the local sights, from the craft markets to the two small churches perched on hills.

There was even a bug museum

There was a ‘Chocolate’ museum. (Which I suspect was really just a chocolate shop that served delicious hot chocolate and artisanal chocolates but had a few old things upstairs—not that I’m complaining)

Any thoughts of leaving town too promptly were put on hold when the local taxi drivers went on strike. With taxis blocking all the main intersections, the centre of town was reduced to pedestrian only. (Plus a few bikes that could sneak through). It looked like another night of luxury was on the cards.

This, combined with the sunny weather, also gave us the perfect opportunity to further explore the streets of San Cristóbal and take a few photos around town.

Our stay in San Cristóbal had been a magical break from our usual overland travel. Long driving days and leaking tents were replaced by the comfort of a luxury hotel with breakfast included. Craft beer. Hipster coffee. Crepes, salads and gourmet burgers. We had enjoyed it, but it was starting to lose its charm.

Guatemala was calling. Adventure was calling. So we said goodbye to our luxury hotel. Got up bright and early and made it out of town just as taxi drivers were starting to shut down some of the intersections for the day.

We can’t by any means claim to be experts on small town Alaska, we’ve only visited a few. But the ones we have visited have all been pretty unique and fun. Three of our favourites in the Alaska so far have been Hope, Whittier and Kennecott. Kennecott will be the subject of its very own blog post due to the large quantity of accompanying photographs that it will involve. But for now, allow us to familiarise you with the two very different towns of Hope and Whittier.

END_OF_DOCUMENT_TOKEN_TO_BE_REPLACED

When your brakes fail, it might as well be on a winding mountain pass with sheer drop offs and hairpin bends. Even better if it is a pass that climbs from near to sea level up to almost 3000m, before dropping back down to below 1500m. (That’s pushing 10,000′ before returning to less than 5000′ for those of you who have not gleefully embraced the metric system.)

Maybe I should lower all the doors so ,Ben can feel at home when you return.

If you want us to really feel at home, I would also recommend setting off random fireworks at random intervals during the day and night and ask everyone else to ignore the road rules under all circumstances…

We just left San Cris and loved it as well! Granted, we stayed at San Nicholas RV Park 🙁 but got lots of exercise walking to/from downtown. I think I know why you think you were locked out when you weren’t… it’s like a secret 🙂 lol.. now, on to Guatemala !

Haha, bet there was a secret to the gate, our problem was that the owner wasn’t even there, someone staying up the back let us in so we could park the car and the owner didn’t come back until way after dark. But, hey, in our books, any excuse to stay in a nice hotel is a good one. 🙂 Enjoy Guatemala, we can never decide if Guatemala or Mexico was our favourite country on the trip so far. 🙂 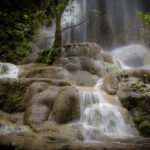 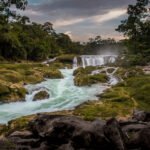