The air was thick with humidity, it was like breathing tepid soup. The roads glistened with moisture in the last of the fading light that was filtering between the rolling banks thunderclouds.

We had started the day high in the mountains of Oaxaca, bundled up for warmth in the cool morning air. But as we wove our way down the serpentine mountain passes it became warmer and warmer.

We intended to get to Guatemala as promptly as two directionless Kiwis could manage.Other travellers warned us that this was not the time of year to enjoy the Oaxacan coast.  The idea of spending a chunk of our remaining days in Mexico camping on beaches in 35º + heat with high enough humidity to make your eyeballs sweat didn’t really sound appealing. So we drove the distance in a day.

It was dark as we rolled into Arriaga. This was our first stop in Chiapas, not because there was anything we wanted to do there, but just because we had decided to keep driving until we actually (finally!) left the state of Oaxaca. Which we managed, but only as it was getting dark.

To escape the thunderstorms, heat and relentless humidity, we found ourselves a cheap hotel with a working fan and investigated a nearby pizza shop for dinner. It had been a long day of driving but it was good to finally be moving again!

After spending over 8 weeks in total in Oaxaca state, (which was pretty close to the amount of time we had initially expected to spend in Mainland Mexico in total) we had itchy feet. Not because of any kind of poor foot-hygiene regime or outbreak of athlete’s foot rampant in Oaxaca state. It was more due to the large number of countries between us and Ushuaia—we hadn’t even made it to Guatemala.

The town of Arriaga turned out to be an enjoyable stop. There were shops, markets and even a delicious coffee shop all within a short walk of our hotel. As well as this view out over the city to the hilltop church (thanks to a kindly cleaning lady who let us onto the roof to take some photos). Although, as is always the case, markets combined with one way streets are a curse rather than a blessing when you try to drive anywhere. So leaving town involved the usual debacle of wrong turns, asking locals for directions, apologising profusely and having helpful locals guide us around market stalls to avoid one way streets.

We were heading out-of-town with a purpose. Our friends Toby and Chloe (Carpe Viam) had said that Aguacero was one of their favourite places in all of Mexico. We were looking forward to spending a day or two camping in the car park and enjoying a peaceful swim in the river surrounded by waterfalls and epic canyon views.

It was grey and stormy when we arrived at the muddy car park above Aguacero, but the rain had temporarily let up. Which maybe a little ironic since Aguacero is Spanish for ‘downpour’. The lady at the ticket booth said, ‘You can walk down and have a look at the falls and the canyon if you want, but maybe don’t go swimming. The river is pretty high.’ She gestured with her hands to imitate deep, fast-moving water. ‘You can’t really visit the cave right now either. But…’ she look forlornly around the damp, muddy car park and shrugged ‘I guess you can camp here if you want.’

We asked her if the weather was likely to improve tomorrow. She shook her head.

We took her up on the ‘walk down and have a look at the waterfall’ option.

After descending the 800 steps into the canyon, wading through water and navigating boggy paths we made it to some waterfalls. Or at least the only falls we could get to without actually swimming—which we had be warned against.

While the falls were scenic—we did have to agree that the river didn’t really look like an inviting place for a dip right now.

Soon the clouds came rolling in with the next wave of thunderstorms. The other visitors to the canyon dispersed rapidly as scattering from the slippery paths to the nearest shelter. We followed suit. I guess we got our Aguacero. Just not how we expected it.

We weren’t quite ready to give up on the outdoor attractions and head straight for the town of San Cristóbal de Las Casas yet. We had one more stop we didn’t want to miss)—Sima de las Cotorras

That would be cool enough on it’s own. But it hides one more secret.

Sima de los Cotorras is Spanish for ‘big hole in the ground that is full of parrots’ (Not a word for word translation there).

Quite a number of little green parrots live in this sinkhole—it provides a safe haven from predators. Every morning, just before dawn, thousands of these little green parrots start their day. A few lone chirps soon becomes a cacophony of squawking. The parrots fly about like mad things, waking their neighbours before spiralling out of the sinkhole in small groups.

Now the dull light of dawn on a cloudy morning is not the optimal lighting condition to catch photos of fast-moving parrots, so excuse the blur. I think this is more one of those ‘go there and experience it’ things rather than a ‘get a pretty photo of it’ type of deal.

The lady at the ticket booth at Aguacero had been right though. The rain was not planning on letting up, the clouds firmly established themselves for the day and the rain continued to sweep through.

You know it is raining too much if you are driving along and this appears on your windshield.

Yes. That’s exactly what you think it is.

That’s when you know it is a good time forget Mother Nature and explore a colonial town instead.  Time to head for San Cristóbal de las Casas.

END_OF_DOCUMENT_TOKEN_TO_BE_REPLACED

We promise. No more dilly-dallying. This is the one where we cross the border to Guatemala. Finally.

Really cool guys. Still following and loving your adventures even it is like a year behind!

Thanks 🙂 Yeah, we hope to catch up to the present time. One day. Maybe. 😀

Very cool, I love you pacing!

Thank you for still following along with us 🙂 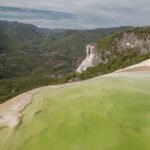 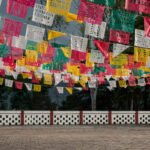