A small bite of the Big Apple

We made it to the East Coast and New York City was in our sights!

Before we left New Jersey, we picked our way through rubbish, used hypodermic needles and other delightful beach debris so that Emma could triumphantly plant her feet in the Atlantic Ocean.

We weren’t sure what the deal was, but New Jersey seemed to have a thing against fun:

So despite a pleasant night camping in the delightfully named Cheesquake State Park (Yes, another camping spot chosen by Emma entirely based on its name), we were ready for the Big Apple.

Our first stop was Brooklyn, where we had lined up a few nights in an amazing apartment off AirBnB. Well actually, it wasn’t the apartment that had sold us, it was the shower—complete with six magical shower heads.

After strategically avoiding the street cleaners and determined meter maids of Brooklyn, Ben managed to wrangle us a mint parking spot right outside the front door of our apartment. He said about 10 times, “We need to take a photo of that parking spot”. We never did. Probably were too busy taking showers, but trust us, it was a good parking spot.

Once we finally managed to tear ourselves away from this indoor marvel of a shower, two very squeaky clean Kiwis hopped on the subway and made for Manhattan. 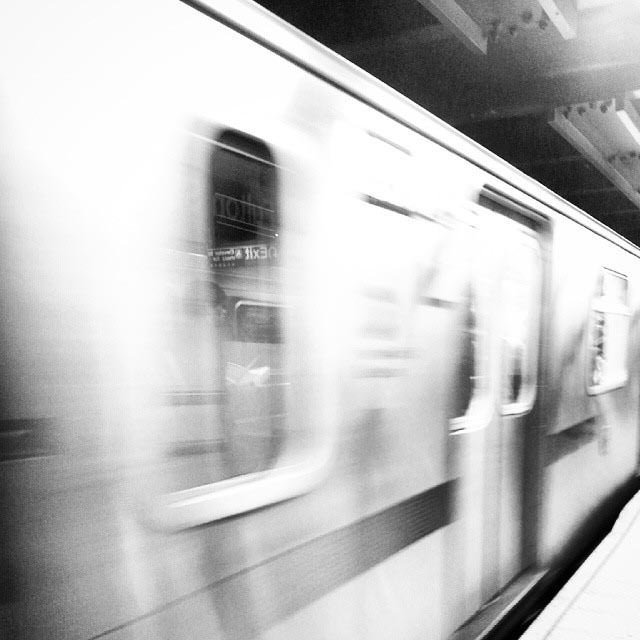 First stop was to pick up a credit card which had been sent to us from New Zealand, this story will someday be included in another blog post. But for now, it is sufficient to know that its retrieval was the culmination of a month-long saga that had begun in Death Valley, resulted in an unnecessary trip to Las Vegas and was finally resolved with the arrival of a shiny new card in New York.

Bring on the sightseeing!

First stop was for some pretzels in Times Square: 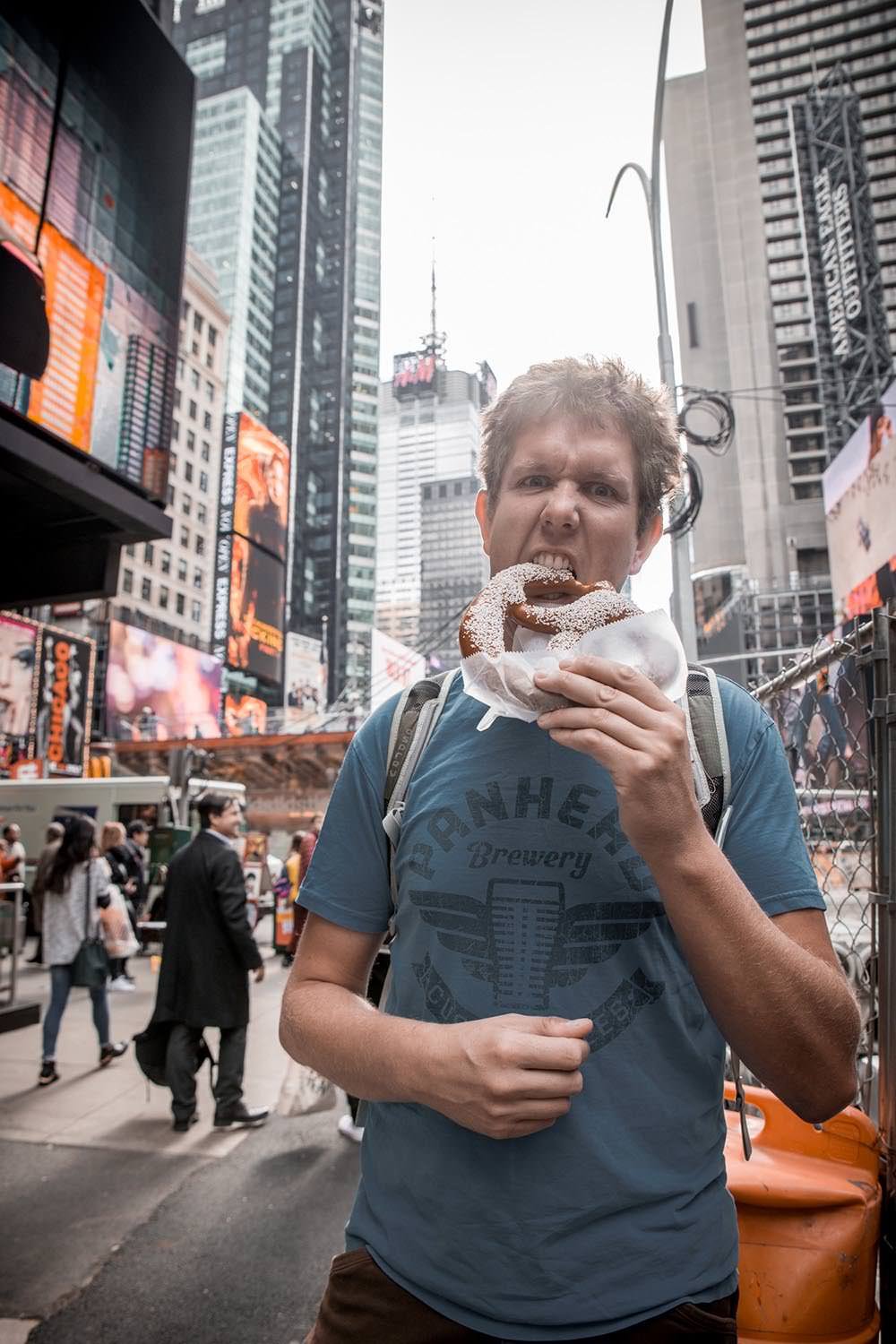 Then off for a long afternoon wandering about Central Park. 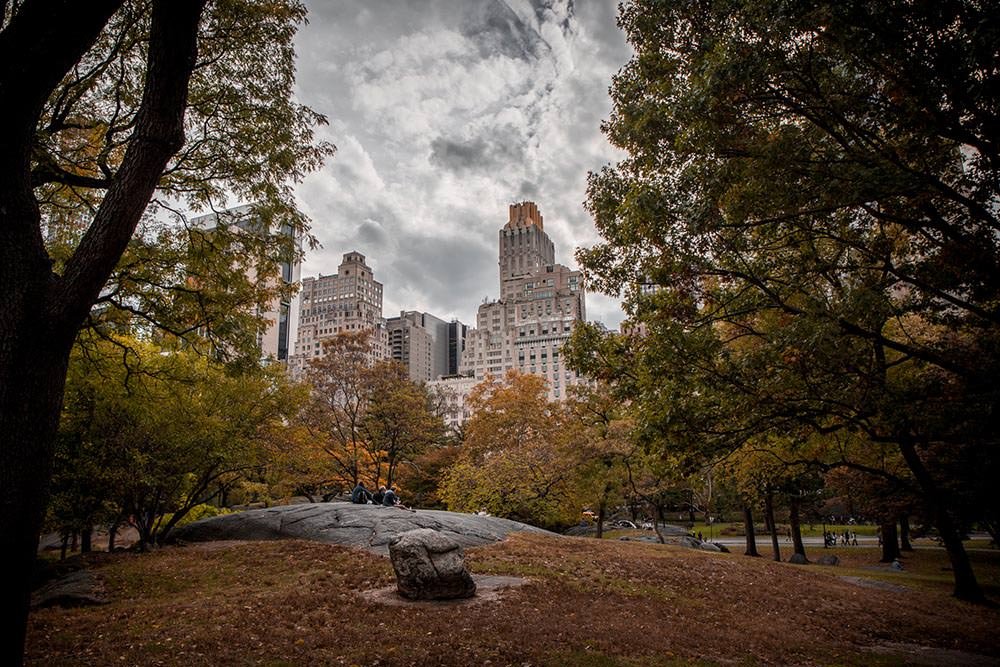 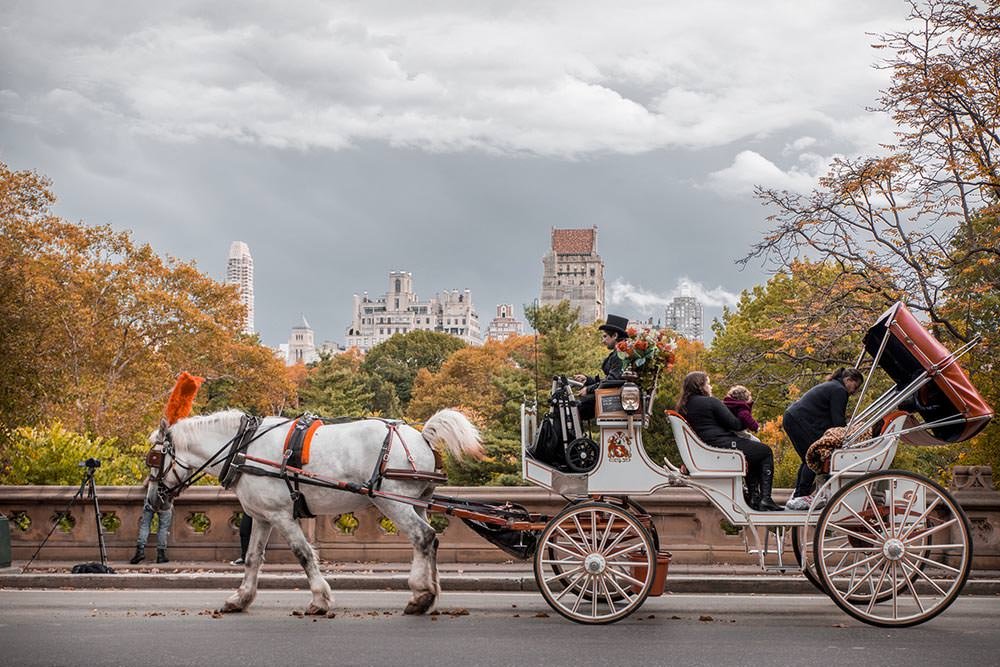 We didn’t end up going on a horse and cart ride, but Emma did coo and cluck over all the adorable horses resplendent in their feathery finery as we passed them by. No amount of cooing and clucking was going to get Ben to travel at slower than a brisk walking pace behind something that was regularly depositing poop wherever it walked. 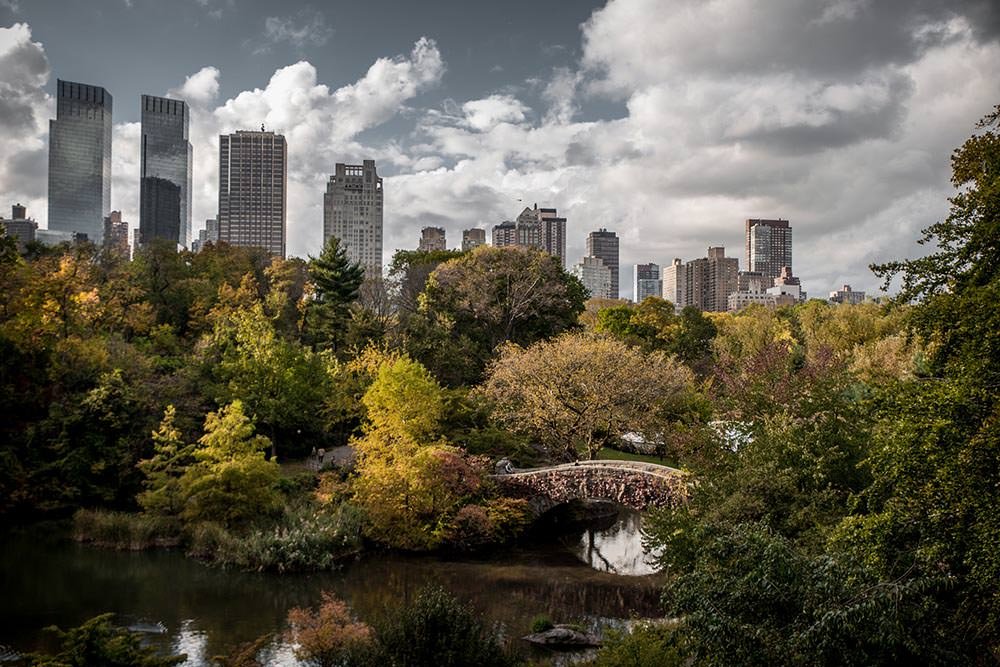 We followed this with a few hours of losing our way in the concrete jungle of Manhattan. We even forgot to visit the Empire State building, there were so many little shops, carts, galleries and cafés to visit. 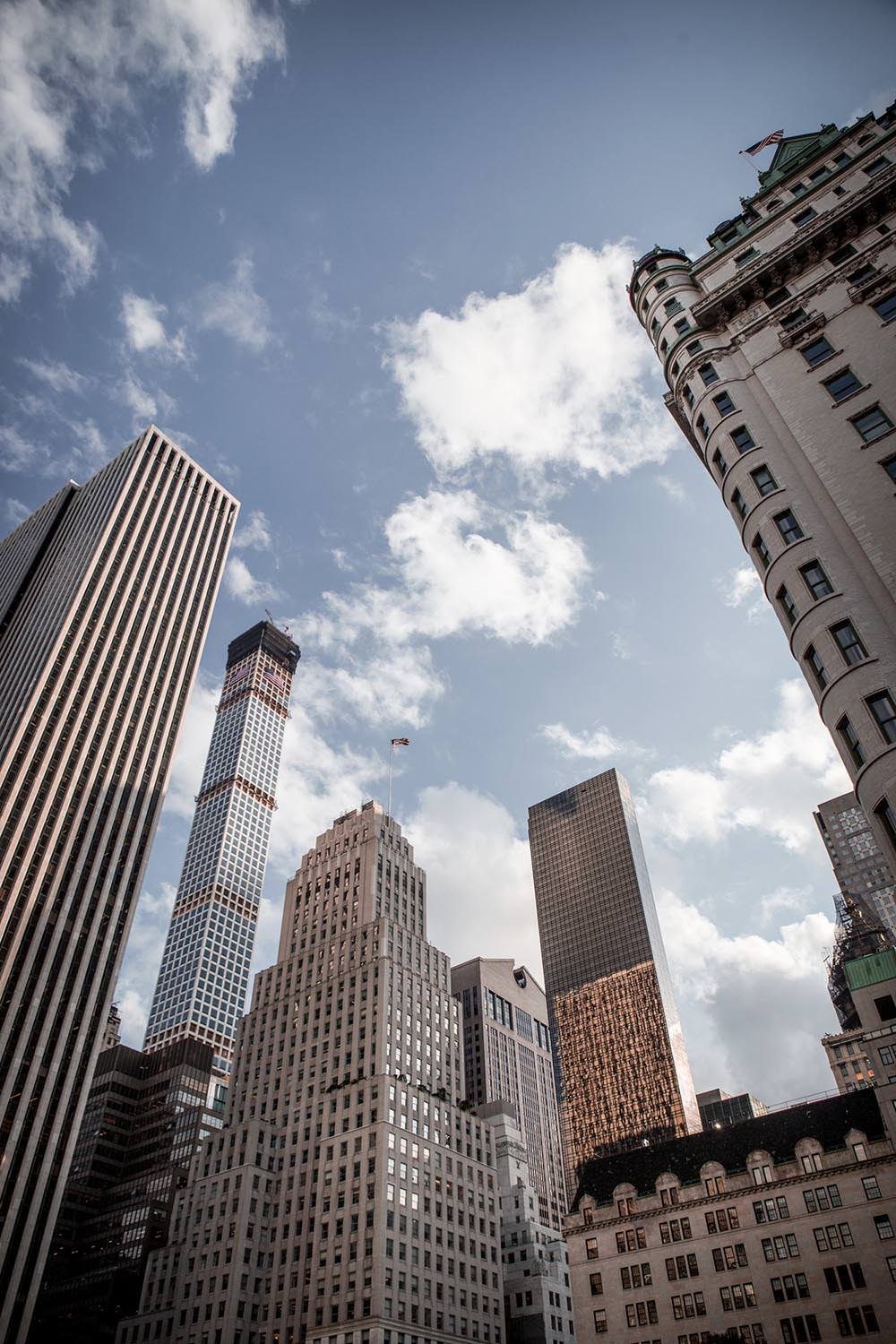 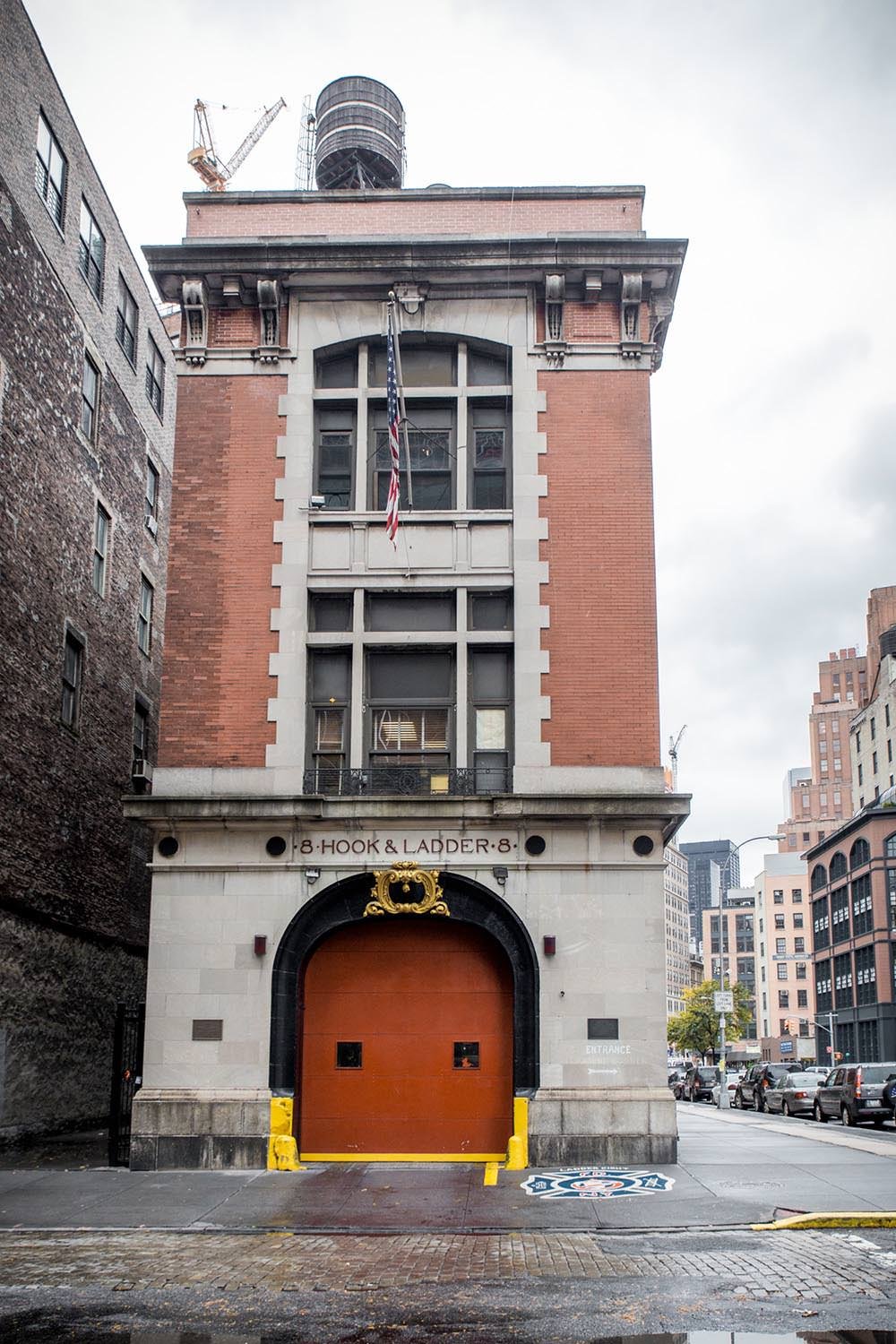 The next day, we did make a point to stop by Hook & Ladder 8 in the hopes of spotting some Ghostbusters, or even better, some ghosts. No luck! 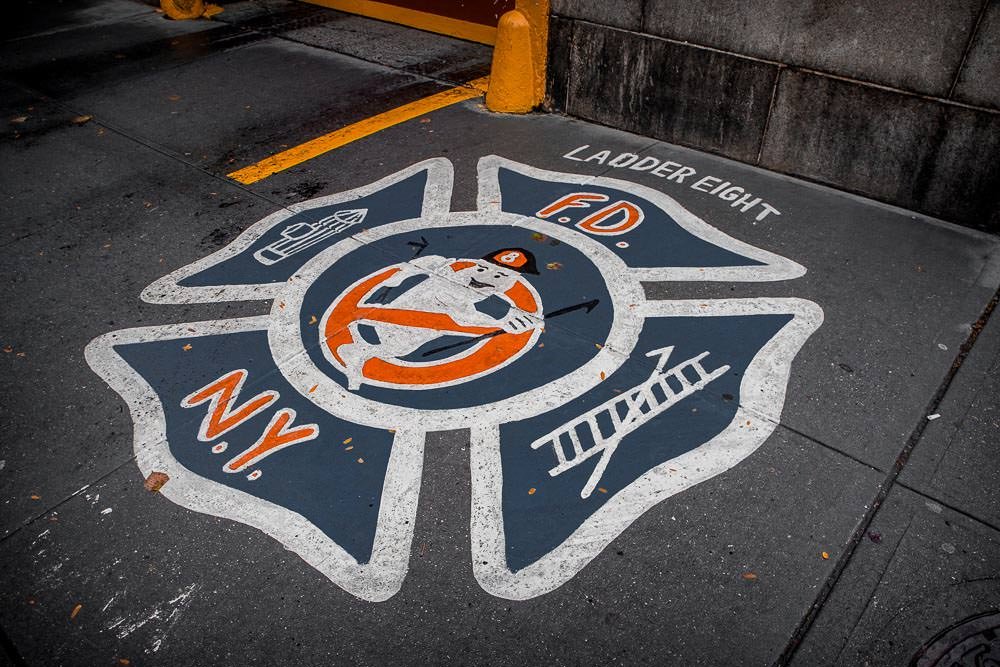 We also visited the World Trade Centre memorial, where the footprints of the two collapsed towers have now been converted into vast memorials with the names of those who lost their lives carved into stone around the outsides. 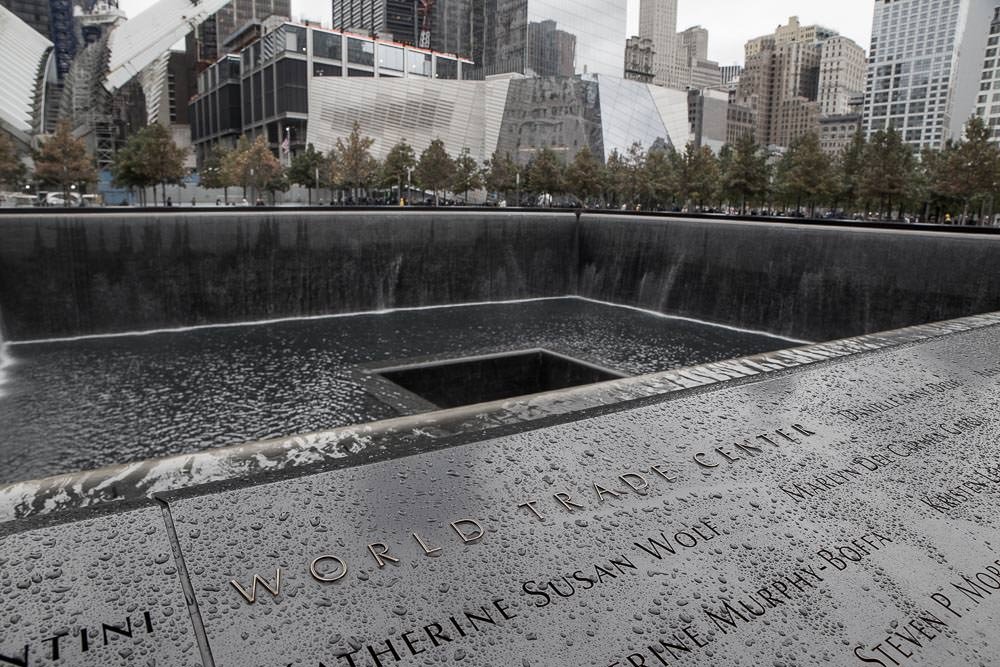 It was just around the corner from this memorial where we had one of the most bizarre dining experiences of our lives. (FYI, there have been some pretty bizarre ones…)

We ducked in to Burger King so that Ben could use the bathroom. Instead of just being able to sneak in and sneak out without ordering any food, we were intercepted at the door by an enthusiastic well-dressed man, who ushered us upstairs. From there we were delivered to our table by a very serious looking maitre ‘d (yes, this Burger King had a maitre ‘d).

While Ben ducked out to use the bathroom, Emma sat their in a restaurant that became weirder and weirder. The waitress (yes, this Burger King had a waitress) stood and stared while she waited for Ben to return so that we could order off the menu (yes, this Burger King had a printed menu) and the manager flitted from table to table trying his darnedest to sell a plate of desserts to all the punters, no matter what stage they were at in their meal.

It was a cross between a carnival atmosphere and fine dining at a homeless shelter. It appeared that they had once seen a TV show or magazine article on a fancy restaurant and were trying (and failing) to emulate it in a fast food environment. After assessing that a bajillion dollars ($8.50) was too much for a burger, once Ben returned from the bathroom and the waitress and security were distracted we made a dash for the door without placing an order in the Burger King. We left feeling sufficiently mentally scarred by the whole experience that we had to go and calm our nerves at the nearest craft brewery.

This was as close as we made it to the Statue of Liberty in the end. (Emma had imagined going on a boat trip and getting a corny cardboard Statue of Liberty hat to wear, but sometimes there just isn’t enough time or money to do everything.)

We instead spent our time at the Smithsonian’s free and informative Museum of the Native American, set inside this elaborate and fancy building. (Conveniently out of the rain as well.) 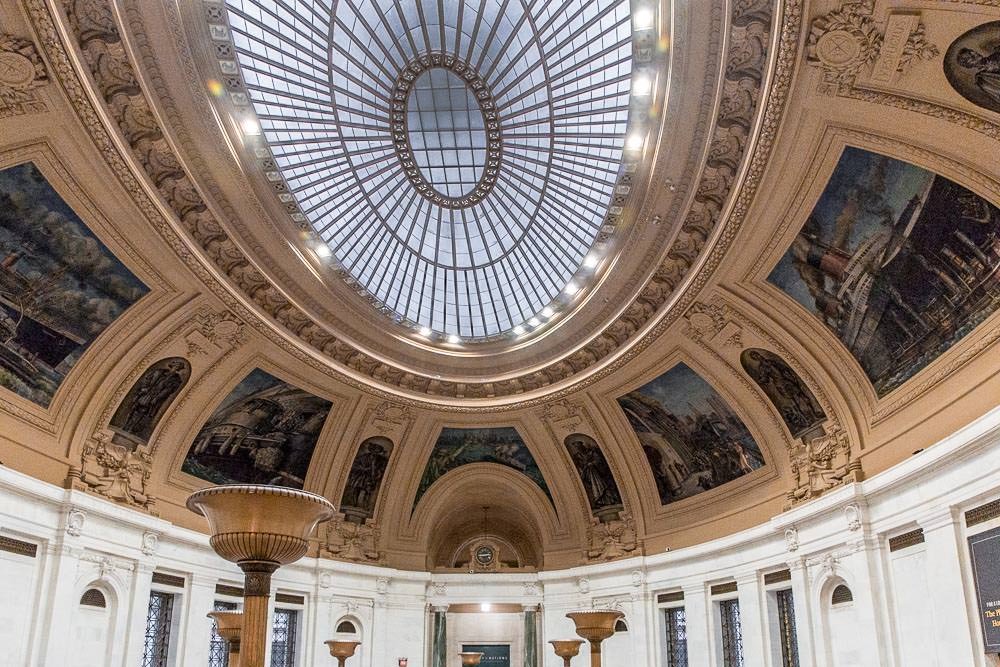 After spotting a New Zealand beer bar, we couldn’t resist a stop in. But it turns out they were sold out of everything except Steinlager. Really? Are you kidding me? Steinlager?

Oh well, it might not be Yeastie Boys or Garage Project, but it is sort of a taste of home. (Not really). 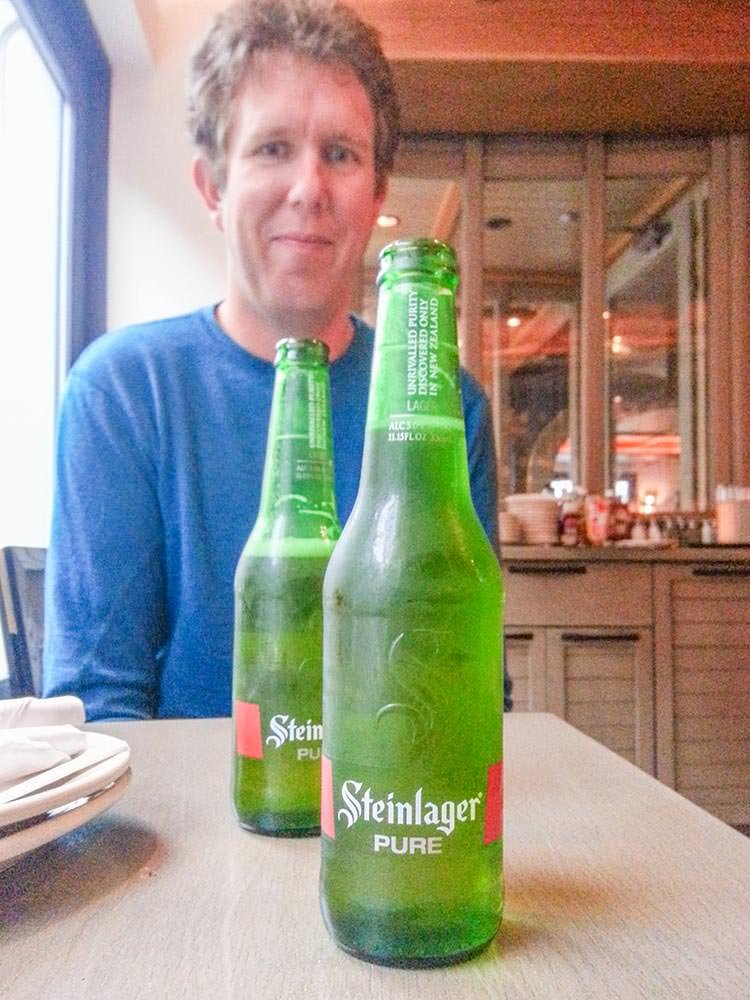 We managed to meet up with TJ and family—Friends from the New Zealand, well, now the Netherlands, either way, New York was sort of half-way point we guess. We caught up for a few beers and dinner and it was great to see them after a few years of not. (No photos, we were too busy having a catch-up yarn!) So, the epic cross-country drive had been worth it, although we both feel that we didn’t leave enough time to explore the city or indeed the East Coast at all. So we’ll be back.

Now, however, Mexico was calling, time on our visa was shorter than ever and we had plans to be in Tijuana in just over two weeks, so the road was calling.

From one strange town that appeared from the dust of the Nevada desert to another. Las Vegas seemed like the obvious next stop after a week at Burning Man.

At a glance they might seem similar. Both springing up out of an otherwise barren desert. Both full of bright lights and constant action, events and people, always something happening.

But in reality they are two polar opposites.

END_OF_DOCUMENT_TOKEN_TO_BE_REPLACED

Our time in Whitehorse proved to be quite busy, catching up on odds and ends, making good use of the wi-fi, doing oil changes, buying the ingredients for Ben’s shower project, that sort of thing.

But we also found time to take in a few of the local sights.

END_OF_DOCUMENT_TOKEN_TO_BE_REPLACED

See also  Mechanical woes and the road to Oaxaca

wow, your pictures of central park are amazing. Haha i’ve never heard about that burger king, but I do recall reading an article about how the burger chains are trying to keep up with more “customized” experiences this must be their attempt 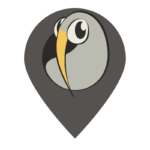