A journey into the underworld

Like all good journeys into the depths of the underworld, this one started with a stay at a nice campground.

San Ignacio did not disappoint. Sure, the town itself wasn’t anything spectacular. A typical tourist hub—full of restaurants, tour agencies and touts.

What made it particularly pleasant was that we were staying in another relaxing campground that we didn’t really want to leave. Why was it so hard to leave?

It could have been the shady hammock filled palapa, maybe the big outdoor kitchen area. Perhaps it was the three friendly dogs. Well, two friendly dogs and one bonkers one…

But what really made it hard to leave was the good company. We spent more time with our friends Simon and Karie (Our Road Life), met new friends like Sabine and Andy (Off the Maps). What’s more, the people working at the campground were relaxed and friendly and loved to just hang out and chat about their country, about the local area and about life in general. It was the kind of relaxed welcoming spot that makes you want to sit still for a while.

We could only sit a little bit still—there was plenty to do and see in the area.

The first stop was the very modern Mennonite community of Spanish Lookout. Visiting this area was like driving right back in the middle of the USA. Gone were the small brightly coloured Caribbean style houses, gone were the dusty roads and small tiendas.

Instead there were grand houses, a stretch of wide sealed highway with immaculate grass verges, a huge service station, and massive hardware and farming supply stores. It was all a little surreal.

We drove via Spanish Lookout to visit… you guessed it—more ruins.

It might seem strange that two people who didn’t really get inspired at the famous site of the Altun Ha ruins would actively seek out other ruins to visit. But we did, because Belize has plenty—and each site is interesting in it’s own way.

This time it was the ruins of El Pilar. These ruins have been partially excavated but not fully restored and the jungle around them is tamed just enough to preserve access to the site. It is as much of a jungle trek as a visit to a ruin site.

In order to not get horribly lost in the jungle, it is important to follow the proper trails. Not the ones created by ants—although sometimes it is hard to tell which is which.

Its location right on the Guatemalan border did create a little temptation to illegally sneak into Guatemala to check out the rest of the site. Part of the nature reserve and sections of un-excavated archaeological site are actually in Guatemala.)

We were deterred by this high security ‘No Entry’ sign.

However, we needn’t have actually gone that far from our campsite to check out some ruins, the ruins at Cahal Pech were just down the road.

Cahal Pech is a quiet spot, with shaded plazas and winding ancient passageways and staircases to explore. It was a former palatial home—and it shows—with rooms, staircases and pathways winding this way and that it was easy to get lost in this former mansion.

What to do next? I know! More ruins.

Xunantunich is a much larger ruin site, also relatively close to San Ignacio, so it would have been wrong not to stop by. By this point we were definitely back in the groove of exploring ancient ruins and had a great morning wandering ancient plazas, climbing steep staircases and soaking up the view from the top of Belize’s second tallest structure—El Castillo.

These ruins are supposed to be haunted, but we visited on a bright, sunny morning and creepy and/or haunted is one thing they definitely didn’t seem. Impressive, giant, tall, but not creepy. Could have been a different story if overnight camping was an option…

But there was one more ruin site in the area that we wanted to see—Caracol.

Probably Belize’s premier Mayan ruins. We had spoken to several other travellers and some had skipped it because of the difficulty visiting. We heard rumours of wild, rough roads, the danger of bandits, the need to be accompanied by a military escort and the necessity to camp in a creepy abandoned town in order to be there in time for the military escort had deterred them.

We spoke to a dramatic young North American couple who had just returned from a visit, they spoke of a rough four-wheel drive track and a perilous race to keep up the military escort. Of tight corners, dangerous turns and challenging, rough roads, suitable for only the hardiest of vehicles. But they also spoke of stunning ruins, well worth the effort.

We had also read that one of the temples was so big that it had it’s own temple and plaza complex built on the roof.

Like all good stories however, the tales of drama, rough roads and military escorts were vastly over-exaggerated. What we found when we drove to Caracol was that:

So there you go. Don’t listen to the rumours.

Although the one about the pyramid having it’s own plaza and temple complex on the roof? That one is true:

It also happens to be the tallest structure in Belize.

Within a few days we had gone from being jaded and disinterested at Altun Ha, one of Belize’s most popular ruin sites—to standing, awe-struck on top of a temple, on top of another temple, in the mountains of Belize, excited to explore the rest of the Caracol site.

Conveniently, a morning trip to Caracol left us with plenty of time to explore some of the highlights of the surrounding Mountain Pine Ridge Reserve, including a huge limestone arch and a river consisting of several pools, waterfalls and swimming holes. Also plenty of leeches. We didn’t get any photos of these but that might be for the best as Ben would really like to be able to forget the time he was covered in dozens of hungry baby leeches.

Here’s some photos of the pleasant stuff instead:

Since we’d been doing a bit of work to build up the travel funds, we decided to reward the long days working in the hot sun with a day trip to the ATM caves. Not to withdraw our newly earned funds, these caves are not the site of an Automatic Teller Machine. Rather it is an abbreviation created for lazy tourists to save people using the full, more difficult to remember and harder to spell name of Actun Tunichil Muknal. Many people had mentioned that this was the highlight of their time in San Ignacio, so we decided to go check it out.

See also  Back to the underworld

It was not possible to visit independently, a guide was required, so we splashed out on an organised day trip.

The downside was, no photographs were allowed—so the photos in this section are not from us, but sourced online to give a better feel for the place.

Initially we thought the ‘no photos’ rule was a bit disappointing as we like to take snaps of our travels, because we plan on holding the worlds most boring and epic slideshow-athon of our road trip when we return home. (Be forewarned family and friends in New Zealand). The the reasons for this camera ban became apparent later in the tour.

After leaving the car park we forded the same river three times, not because we were indecisive, but because the river was. The most direct route to the cave took us through its icy waters. We soon realised that it was this icy water that we would be swimming through to visit the cave. Yes, that’s right, swimming. This wasn’t a dry cave, a river flowed through it, it was this icy cold river that we would be following to our destination.

First step, cross a several metre deep icy pool at the cave entrance. Jumping straight into the deep icy water—we were well and truly awake, an icy morning swim is more effective than the strongest coffee. We swam to the other side of the pool in the cave entrance and began our journey into the depths of Xibalaba, the Mayan underworld.

After alternately walking, swimming, paddling and splashing our way through the icy cave waters, we arrived at an area where the guide indicated it was time to climb up to the drier upper reaches of the cave system.

This upper section of cave houses the remnants of many years of ancient Mayan underworld rituals. Pottery and offerings rest in the cave as they were left, moved only by the flow of water and the passage of time. 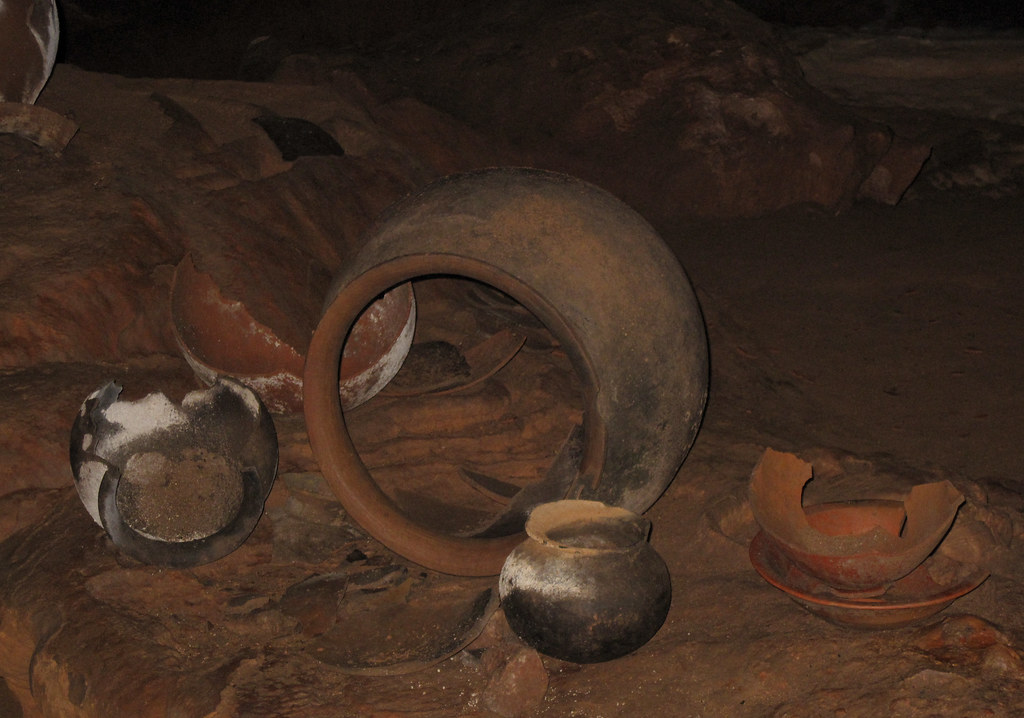 And yes, it is an ancient Mayan site, so the offerings included human sacrifices, the skeletons of 14 poor souls remain to this day. This includes the still fully intact, calcified remains known as the ‘Crystal Maiden’ (who actually turned out to be a crystal bloke, but the name stuck).

Now the reason why no cameras are allowed?

Well, as it happens—they used to be.

In fact, people used to be able to walk amongst the artefacts wearing shoes. Now you have to take your shoes off and walk around in socks, because apparently this encourages people to take a bit more care about where they are walking. It discourages people from stomping on ancient pottery—rumoured to be a problem in the past.

No cameras? It discourages people from dropping their cameras on thousand year old calcified skeletons trying to get ‘the shot’. Yes, that’s right, some numpty dropped a camera on the preserved skull of an ancient Mayan sacrificial victim. That’s why there’s a hole in his head and some missing teeth. *sigh*

The following photo is from back before the camera ban was in force. There is now a hole in the head of this skull, the missing teeth in this shot were from an even earlier camera dropping incident. From what we understand the second camera to the noggin was the final straw.

Our tour guide said he expected that as time passed it would get harder and harder to visit the cave, or access to the artefacts would be reduced. It poses a challenge to the guides to keep hundreds of visitors in line day after day and prevent damage to the artefacts.

But for now, a visit to the Actun Tunichil Muknal cave allows you to closer to ancient history than most museums, with a far more adventurous entranceway.

Close to the famous Tikal ruins in Guatemala lie the lesser-known Mayan site of Yaxhá.

Despite being only 30km as the quetzal flies from its famous neighbour, the drive is a little longer. As a result far fewer tourists make the journey to explore these amazing ruins.

END_OF_DOCUMENT_TOKEN_TO_BE_REPLACED
See also  The mythology and magic of Atitlán

A little over a week after our first miserable failure. We were back, climbing Volcán Acatenango… again.

Well, this is from a while back, so *spoiler alert* we went back for a bit after this 🙂

Your post makes me want to visit Belize again and caracol for sure!

[…] new digitally nomadic lifestyle. Yes, we could now afford to splash out on exciting tours into the Mayan underworld, but we also regularly required reliable internet access—The curse of the modern nomad. A need […]

[…] animal encounters, we returned to San Ignacio. This had been our home base for exploring the Mayan underworld on our last […]

[…] There was one time, way back in Belize when we were very nearly in Guatemala. […]

[…] new digitally nomadic lifestyle. Yes, we could now afford to splash out on exciting tours into the Mayan underworld, but we also regularly required reliable internet access—The curse of the modern […] 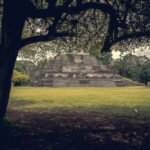