Not a lot can be said to enhance the awesomeness of a surrealist sculpture garden in the jungle. So we’ll just launch straight into some photos.

You may of course be wondering what a surrealist sculpture garden is doing in the middle of the jungle in Mexico. It is probably pondering things like that which keeps you awake at night.

Never fear, we have an explanation (and therefore a cure for insomnia without actually directly implying that our blog is dull.)

According to the gardens’ official website, the whole thing started as an alternative to a failed orchid plantation.

The man responsible for this creation grew up in a modest 300 room family home had inherited just enough money to spend on being slightly mad. This man was Edward James, a British poet and patron of the surrealist art movement.

He moved to Mexico for the usual reasons—better food, fewer rules, nicer weather. When his orchid plantation was decimated in a freak snowstorm, he began work on building a vast complex of surrealist sculptures instead.

When we say vast. We mean vast. We wandered about in these gardens for an entire day.

Edward James spent three decades managing this project, employing local contractors to build all sorts of constructions out of concrete. Many were intentionally left unfinished, all were designed to create some sort of jungle paradise, suitable for a slightly eccentric British millionaire.

After his death, the bill for the upkeep was a bit too much. No one else had quite the same resources (ie truckloads of money). His newly planted orchids died and the wild animals were released into the jungle.

The sculptures weren’t safe either—the jungle started to fight back.

Recently, a charitable foundation with help from the local government and, unsurprisingly, Mexico’s cement company has taken over the running of the gardens. They are slowly stabilising and re-claiming the creations from the jungle.

Las Pozas was one of those places that, despite otherwise insufficient planning on our part, has been on our trip radar for years. Emma saw an article online a couple of years before we left. Then went on and on and on about it. A suspicious person might say that the entire Pan American trip was engineered as an excuse to visit said surrealist sculpture gardens. While this is not entirely true, it is fair to say that our expectations were pretty high.

After all these years of babbling on about Las Pozas, it was finally time to see what all the fuss was about. We left San Miguel de Allende to backtrack to Xilitla in San Luis Potosí.

Google had suggested that this drive would take about four and a half hours. We know that Google blatantly lies about driving times in Mexico, so we figured a reasonable estimate was more like eight or nine hours.

Despite being fully aware of this fact, we still didn’t manage to leave until lunch time.

We spent the afternoon zigzagging our way through some more of Mexico’s spectacular mountain country.

Unsurprisingly, it was after dark when we found ourselves still winding through the valleys leading to Xilitla. The first rule of overland travel is “Don’t drive at night.” We never seem to break this rule somewhere sensible. It is always on a winding, precarious mountain road with blind corners and sheer drop-offs.

Our excuse on this occasion was that we were lured by the temptation of a particularly pleasant campground at the end of the drive.

We were not disappointed.

Well, initially we were. Because we found out that the driveway wasn’t flat enough to sleep in our rooftop tent.

But once we fished the ground tent out from under our recently purchased cowboy boots, we settled right in.

As usual, our opinion of the campground was further enhanced by the presence of some good four-legged company. Including this guy:

As we had driven towards Xilitla in the dark the night before, we unable to clearly see the surrounding scenery. Despite this obvious hinderance it was still very apparent that we had arrived in a different world.

After months in the dusty cactus-punctuated Baja Peninsula, we had then spent some time driving around Mexico’s high plains and mountainous passes of the Sierra Madre range. These environments for the most part were arid, dusty and in some places quite barren. At altitude the nights were cold, the air was thin and dry and, being mountain kind of people we found this environ familiar and welcoming.

As we dropped down to the much lower altitude of Xilitla, the mountains were less craggy and mountainous. Although the landscape was no less rugged, the road was no less winding. Without even being able to see the area properly it was apparent that the landscape had changed. The air hung thick, dampness clung to every surface. As we negotiated the still winding road, small communities were made visible by their lights. Clinging to the hillsides we caught glimpses of daily life unfolding by glowing porch lights and swarms of insects dancing under flickering street lights. Overhanging trees were caught in the shifting glance of our headlights.

We were finally in the jungle!

The reason we were there was to finally experience Las Pozas after years of Emma going on about it and telling Ben how amazing it looked.

Ben had been slightly concerned that the eight hour drive through the mountains, in the dark, risking life and limb, facing the most terrifying mountain traffic Mexico had to offer, followed by a night in the ground tent with deflated sleeping mats may not have actually been worth it.

He wasn’t convinced… until we arrived at the gardens.

Walking down to the first area of pools along the river, it felt as if we had wandered into a scene from the Labyrinth. There was no sign of David Bowie, but we were expecting to hear a small worm say “‘ello” from any one of the moss-covered walls.

Or perhaps receive some sort of assistance from various magical creatures.

With narry a magical creature in sight, we simply had to enjoy the gardens themselves. Which was pretty easy to do. 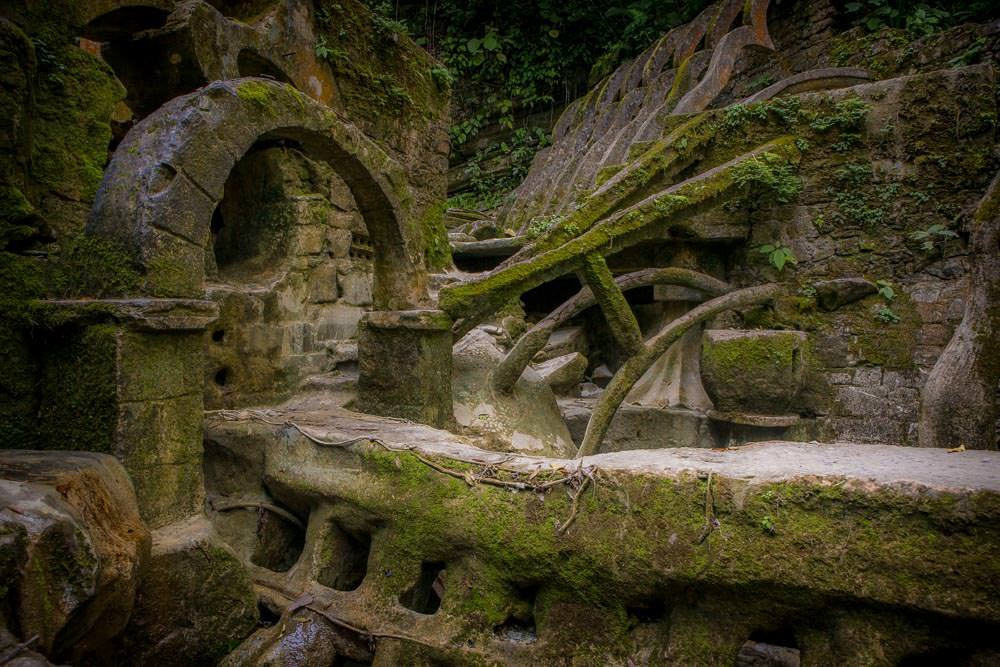 A great thing about the gardens was that the buildings were open to walk about on. There were no handrails, no tape to stand behind and no sculptures behind perspex panels.

It wasn’t like the buildings weren’t being maintained, there was one that was under repair so was closed to visitors:

Others had signs suggesting maximum numbers of people to walk up to the second storey at once.

But mostly it was just trusted that the buildings would stand up to their intended use and that if anyone did anything stupid, and stepped off a wonky staircase, it was their own responsibility.

We are pleased to report no injuries or damage to the sculptures as a result of our day of exploring.

It was getting late in the day by the time that we discovered this enticing sign:

We were interested to find that the gardens did indeed continue after this point:

It was probably a good thing that it was late in the day, because it was very tempting to just keep going to see what else was hidden in the jungle further and further up the increasingly unkempt trails.

It seemed like only and instant before we had whiled away an entire day in this millionaire’s surrealist Garden of Eden. We might not have the means to build our own million dollar surrealist sculpture garden, but we are still lucky enough to travel half-way around the world to enjoy someone else’s. We’re happy with that.

Las Pozas. Worth the drive.

Sure, we only had a few days left on our US Visa, but it would have been poor form to leave without visiting Yellowstone National Park. So we took another detour.

END_OF_DOCUMENT_TOKEN_TO_BE_REPLACED

See also  Not quite Guatemala—Part 2

Visiting Dawson City is like travelling back in time to the gold rush era. The dirt streets are lined with wooden boardwalks all leading to buildings that cause you to believe you have accidentally hit 88mph and travelled back to the wild west.

END_OF_DOCUMENT_TOKEN_TO_BE_REPLACED

It looks amazing. Like the perfect grown ups’ playground. Glad that I get to see it through your pictures.

That’s exactly what it was like, I guess that’s why we couldn’t resist it!

Is it just me or does the campground entrance remind you of the Jurassic Park gates?

Now that you mention it… Maybe we should be more cautious about where we camp in future.

Fantastic photos! Thanks for sharing – now we don’t have to drive there ourselves 🙂

Oh, but you should—it’s even better in person! Only a short detour from Guatemala (by Flightless Kiwi standards anyway…)

Ancient ruins and the sounds of the apocalypse | Flightless Kiwis says: Reply
June 27th 2015, 8:06 am

[…] of a practically perfect couple of weeks. We had visited the surrealist sculpture gardens in Xilitla, watched hundreds of thousands of birds dance in the skies above San Miguel de Allende, witnessed […]

It looks amazing would really like to visit the place, Thank you for sharing this with us.

Hope you get a chance to go, it was really spectacular 🙂