There comes a time in every traveller’s life when they feel the need to camp at the foot of an active volcano. Right?

Well, we did anyway.

We heard the nearby volcano Popocatépetl was quietly bubbling away. Conveniently in the same general direction we were heading.

We arrived at the crossroads at the top of the Paso de Cortés saddle to this view:

Time for a volcano selfie:

This seemed like the perfect spot to camp, so we asked at the park headquarters how much it would cost. We were charged a reasonable fee and sent to ask the chap controlling the gate about where we could set up camp. The man at the headquarters didn’t give us a wristband, which we found out the next day was meant to be included in the fee we payed.

This meant that when we pulled up to the gate, the chap there assumed we hadn’t payed any money at all and directed us to camp by the picnic area in the car park.

Not quite the adventure in nature we had planned. It was, however as close as we could possibly get to the volcano. The alert triggered by the hanging volcanic cloud had resulted in the road heading the other way—towards Popocatépetl—being closed to entry.

The very best thing about setting up camp here was that we were immediately adopted by a family from Puebla who insisted on sharing their afternoon lunch with us. Over a meal of delicious fresh bolillos stuffed with spicy chicken we sat and watched the volcano puff smoke skyward.

The family had a daughter visiting from California. As she was fluent in both English and Spanish,  this helped the conversation flow a lot better (and reminded us how much Spanish we have yet to learn). The grandfather regaled us with tales of the times he had climbed Popocatépetl in the past (when it wasn’t spewing out ash and vapour). The afternoon rolled past rapidly in the shadow of the spectacular volcano.

This was technically our second lunch as we’d already stopped for a bite when we first arrived.

As evening rolled around, the car park emptied. We bought the last few odds and ends from a snack retailer who had been slowly charming us all afternoon with his assorted home-made foods. “Ok, I’ll buy just one more thing—wait, that looks tasty, maybe one of those too…”

As more and more people left, the noise died down.

The rumble was clear now. We’d heard it on and off during the afternoon, between shouts from children playing soccer, the repetitive call of the elote vendor and the laughter from picnicking families. Now, as the car park emptied out and the day-trippers and vendors packed up their stalls, the rumbling was the loudest noise around.

One of the food vendors was packing up his car beside us. Although he must have frequented this spot regularly, he stood there in awed silence listening to the angry growling from the volcano. “Just listen to that, it’s incredible” said the vendor. We agreed. We all simply stood there, transfixed by the volcano, enveloped by a sound that seemed that it could not be from this earth—although, more than anything it was. The deep, echoing rumble of a force of nature far beyond our control and perhaps a little close for comfort.

See also  Wolves at the door

We settled in for a night of camping in the car park. Anywhere where the sun wasn’t was freezing cold, it was going to be a chilly night.

Bundled up in our winter woolies we set up the camera to film a night-time volcano time lapse.

Had we known about this whole wristband malarkey and that the money we had payed was actually enough to get us past the gate and into the Popocatepetl—Iztaccihuatl National Park (try saying that fast ten times—or even just once) the following time lapse may have been more successful. It turns out that this particular car park is pretty well lit and was quite regularly frequented by travellers and truck drivers in the early evening. An unrelenting onslaught of bright lights in the foreground, combined with the increasingly icy air meant we pulled the pin early on this one and called it a night before it got any colder.

But, failure or not, it is still a time-lapse of a volcano—so we’ve included it here for your viewing pleasure:

Despite reading information in the visitor’s centre about the size of the rocks that would rain down on our heads if Popocatépetl were to get properly mad, we had a surprisingly comfortable night’s sleep. It might have been because we were still sleep-deprived from the apocalyptic fiestas in Teotihuacan. Maybe it was the soothing roar of the volcano. It certainly wasn’t the amiable temperature, but we slept comfortably, until we woke to an icy, icy morning.

The frozen layer coating the inside the tent suggested that extracting ourselves from our sleeping bags was not going to be a pleasant proposition. Also, the volcano appeared to have stopped rumbling. After sticking out heads out of the tent, we confirmed that the show was over, Popocatépetl had gone back to sleep.

Any thoughts of staying another night to have a second attempt at a time-lapse from a different location were gone. It was time to head to lower elevations, time to stow the sub-zero sleeping bags and put the mittens away. We were heading to the warm coast.

Not before a quick stop at Cholula though…

This place was not actually somewhere we had even heard of before arriving in San Miguel de Allende a few weeks earlier. We had been thinking more about our plans for getting to Cuba in the coming weeks, not about what there was to see in the immediate area. Brian and Carley (Adventure or nothing) suggested we stop by. We remembered them saying positive things about this particular pyramid. There was even a church built on top of it.

It was just a brief, overnight stop en route to warmer weather. But Brian and Carley were right, we couldn’t miss seeing the great pyramid of Cholula. It is the largest pyramid in the world*—take that Egypt. Apparently this pyramid is the largest monument ever built. Although, at first glance, it appears to be a hill with a church on it.

A sign near the entrance to the church tells of how the Spanish first erected a cross on top of the pyramid which was destroyed by lightning strike. Not taking the hint, they tried that a couple more times and eventually built a big, sturdy church to make a point. It is this church which you can see on the top of the pyramid today.

The presence of an historic church on top of an even more historic pyramid of such a grand scale makes this a memorable attraction.

If you are worried that visiting such a place would be a disappointment after visiting an active volcano, never fear, you can also see Popocatépetl from the same spot—win!

For much of the time we were in town, the volcano was hidden behind cloud not of its own making. We did catch glimpses of greyer smoke behind the cloud, suggesting that the volcano was back in business.

Even without the erupting volcano to look at, the view from the top of the pyramid was impressive.

Around the base of the pyramid, sections of the structure and different stages of building have been partially excavated and restored, so you can get a feel for what the site would have looked like before it looked like a hill with a church on it.

This might all seem like reason enough to visit Tlachihualtepetl, the Great Pyramid of Cholula. But what makes this pyramid even greater, is that in order to better understand the construction of this monument, archaeologists dug several kilometres of tunnels beneath the massive structure.

Less than one kilometre of these tunnels are open to the public, but that is still several hundred metres of awesome to explore.

We got to see the many different layers of construction that went into this grand monument. The final addition of the church wasn’t the first time this pyramid had been repurposed, this site had been built upon several times over the centuries, with new structures superimposed over older buildings. With this approach to architecture, you can start to understand how Tlachihualtepetl became so huge.

The tunnels we were exploring were well lit and easy to follow. However, off in every direction—but behind locked gates—we could see tunnels heading off into the darkness. Some descending to lower levels, others twisting around corners and disappearing, other staircases led up and out of our sight. It must be quite an adventure to explore all these tunnels. Although it is easy to see why they don’t allow us tourists to wander from the approved route, they’d be accidentally locking people in at the end of every day if it were all open.
It did leave us wondering who you would have to bribe, pay or sweet talk for a ‘behind the scenes’ tour here…

We had enjoyed our brief visit to the unique and memorable Cholula, but warmer weather was calling. It was time to leave this place behind and make for the coast. 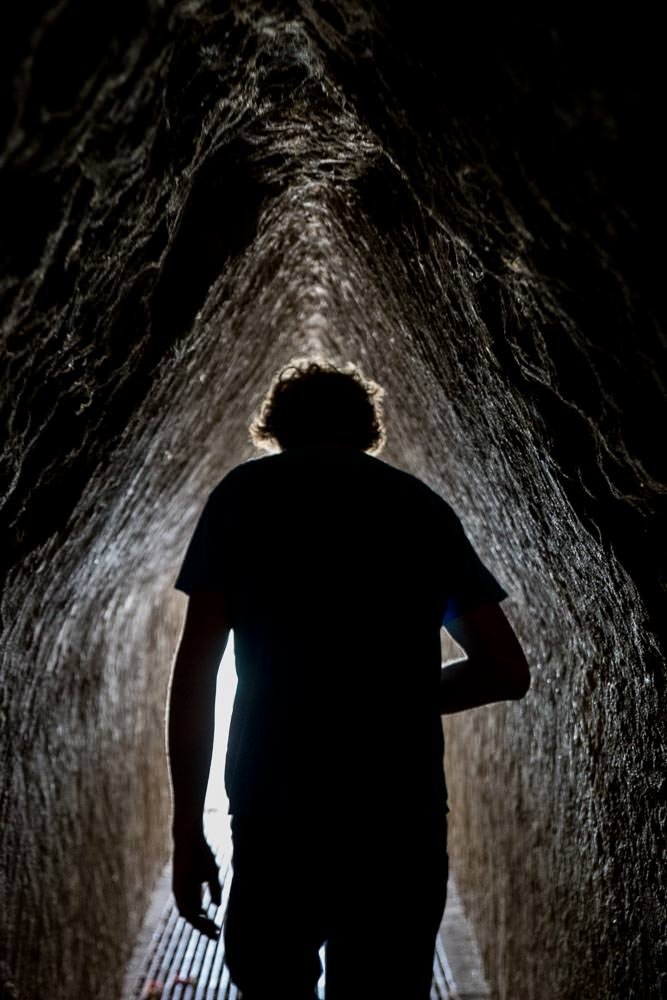 After spending some time driving aimlessly around Utah, we reached the conclusion that it is quite possibly another planet.

END_OF_DOCUMENT_TOKEN_TO_BE_REPLACED

Biblioteca Palafoxiana is quite possibly the oldest public library in North America. It looks like something out of Harry Potter. Located in Puebla, it was only by luck that we happened to stumble across this impressive collection.

hi guys, we miss seeing you on the road. keep the updates coming. i enjoy reading about your adventures.

[…] Our drive down the Gulf Coast and into the Yucatán Peninsula was greeted with overcast skies, rain and cooler weather than we had been experiencing in Teotihuacan at 2,300m above sea level. Thankfully, still significantly warmer than the nights were at 3,400m. […]

[…] they came back. We hadn’t quite made it into the city last time, simply visiting the nearby Great Pyramid of Cholula, before dashing south at a rapid […]

[…] they came back. We hadn’t quite made it into the city last time, simply visiting the nearby Great Pyramid of Cholula, before dashing south at a rapid […]