After a late night arrival on the Mexican mainland, we were slow to get started on the first day of the New Year. It took a quiet New Year’s Day in Los Mochis before we were ready to start thinking about the next stage in our journey.

We hadn’t actually planned on being in this area at all, so we had no idea what there was to do and see. We had spontaneously opted for the ferry journey from La Paz to Topolobampo (rather than the alternate port of Mazatlán) for a couple of reasons:

We googled the state of Sinaloa to see what touristy things there were nearby and what would make a good first stop on our travels. But Google wasn’t initially a lot of help. A lot of the articles about what to do in the state of Sinaloa revolved around how soon you would be killed horribly if you left the comfort of your Mazatlán hotel and/or drove on something that wasn’t a toll road. Not a very encouraging start to a road trip around the state of Sinaloa.

After talking to some locals, it sounded like these warnings were both greatly exaggerated and out of date, but it still left us unsure of what we wanted to do in the area.

Luckily, en route to Topolobambo a couple on a motorcycle trip down from Arizona over their Christmas holiday had mentioned El Fuerte and told us about the list of Pueblos Mágicos.

Pueblos Mágicos (Magical towns) are given that designation by the Mexican tourism board and it basically provides a cheat sheet of towns to visit that will each be awesome in their own unique way.

El Fuerte is one such town.

Upon arrival we immediately realised that taking the motorcyclists’ advice and driving to El Fuerte had been the right choice.

The centre of town was a web of cobblestone streets, all leading one way or another to a verdant central plaza.

With immaculately kept, brightly painted buildings it looked like it would be an expensive tourist trap.

There were several posh hotels and swanky looking restaurants, but there were also street vendors, ice-cream parlours and small family run businesses. It was a real town, where ordinary people lived, doing ordinary things. It just happened to also be strikingly beautiful. Convenient.

It was only a short walk down the road from the plaza into the bustling main street of town, lined with vendors selling all kinds of tasty snacks. However, in the evenings we waited in the busy plaza for an old man to roll past with his cart full of 10 peso elote coctel, then chased that down with a spicy bacon-wrapped hot dog. Not a nutritious meal, but incredibly tasty and well priced, at less than $5 for a filling meal for two people.

The best part was, there was no one trying to sell touristy things. No one stood outside the restaurants waving the menu, no one shouted at you to buy their tour. There was a gift shop full of knick-knacks just off the central plaza, but there wasn’t anybody standing outside trying to pressure you to buy. We had found an amazing town that you could just walk around and enjoy.

Walk around we did, the town itself wasn’t large, so it was perfect for exploring on foot. We spent hours just wandering around looking at all the different colonial buildings and taking quite a number of photos.

The streets of El Fuerte were just as magical after dark. The vibrant colours of the buildings were muted by the glow of yellow street lamps but the cobbled streets became a magical and atmospheric place to be after the sun dipped below the horizon.

Even better, to start the New Year off in the right way, we were celebrating with a stay in a hotel. (Sorry to ruin anyone’s illusions that we are rugged outdoorsy types that camp all the time, we love hot showers, internet and walls from time to time). It was not just any hotel, we had found a cute little family owned place that appeared as if it had grown organically out of the hillside. They were working away at extending it further while we were there.

Each room was unique—in the obvious way, in that they were all different to one another, different sizes, shapes and layouts. But also in that each one had a different bird mural painted on one of the walls. This might not be ideal for an ornithophobe, but we thought it was pretty cute. (Far less unsettling than a certain Clown Motel) Also the rooms were pretty luxurious.

Another great thing about the town of El Fuerte was that most people spoke Spanish. Unlike on the Baja Peninsula, where it had been all-too-tempting to resort to ordering food and making accommodation arrangements in English. Here we were immediately finding ourselves pushing the limits of our Spanish-speaking abilities and we were improving in leaps and bounds.

(Our Spanish was and still is, terrible, just measurably less terrible than it was initially.)

Warm by day, El Fuerte cooled off quite dramatically on a few of the first nights we were there. We were glad to be tucked up our cozy hotel room. Even more so when we had sunset views like this from our balcony.

There was also a friendly cat handing around, which never fails to improve our opinion of where we are staying.

Aside from friendly cats, the town of El Fuerte has a few tourist attractions.

The Rio Fuerte flows right by the town and is apparently perfect for a spot of fishing or bird watching—although we did neither. We did however, enjoy the local ceviche and eyeball one or two interesting birds near the river. Also a cow.

There is the fort for which the town is named:

Not actually the original historical fort, but a modern reproduction.

The fort now contains a museum and we found it to be worth its modest 20 Peso entry fee for the two of us. Although some of the museum artifacts were of questionable historical interest to us. Specifically the VCR, which just made us feel really old.

There was also El Chepito, the little brother to the famous train—El Chepe which brings tourists to the Copper Canyon from Los Mochis, via El Fuerte to Creel.

El Chepito however, just drives around town tooting loudly. We were very close to going for a ride on El Chepito, when Ben managed to dodge the embarrassing “ride the small children’s train” bullet by distracting Emma with flan. This always works.

Just out of town are some stone petroglyphs carved into the rocks. The depict all sorts of different animals, people, concepts and possibly an alien or two.

Alejo was our guide for the day and he took us around to look at all the petroglyphs and pointed out plenty that we wouldn’t have spotted on our own. Including this clear depiction of ET.

Or a strange looking person… However, this was much closer than we got to encountering alien life forms than we did in all our time in Nevada, so we insist on telling everyone that we saw an alien carved into the rocks at El Fuerte.

But there were plenty of other non-alien based petroglyphs to see as well: 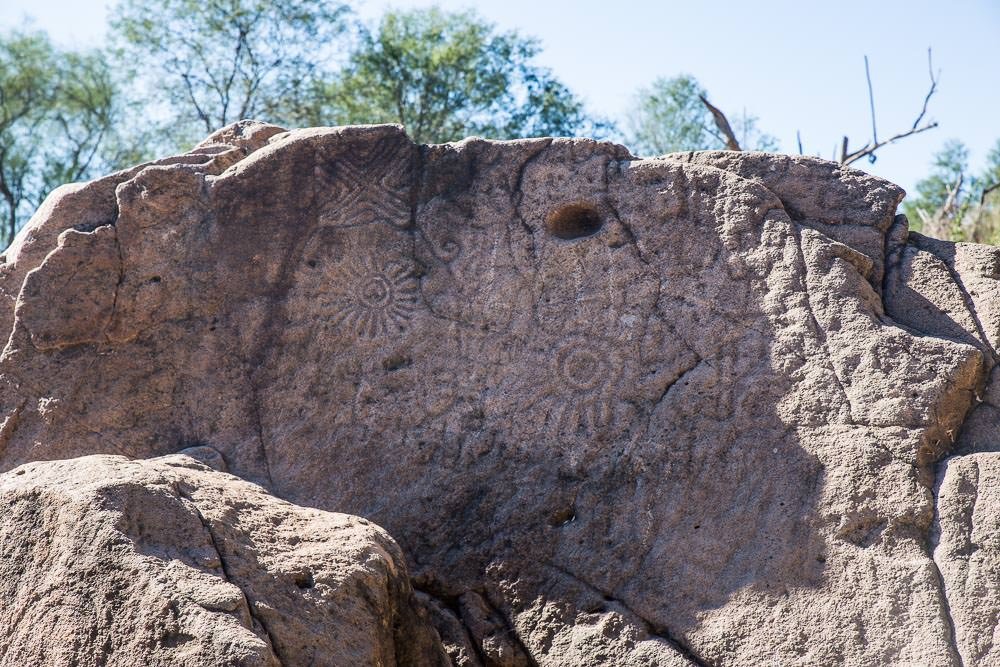 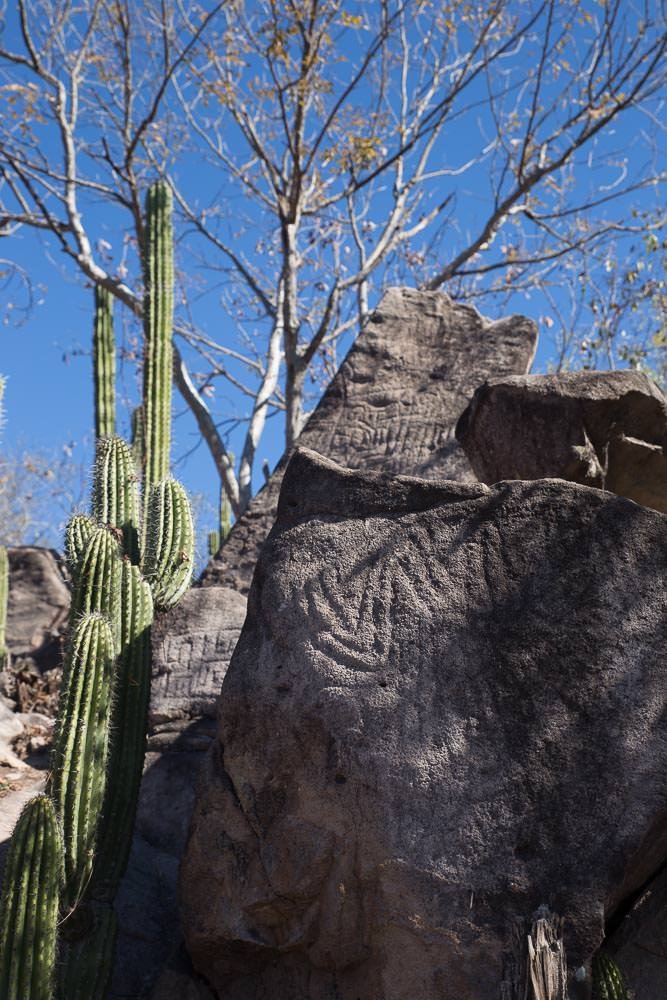 However, for us the real attractions of the town were the architecture and the people. The buildings were brightly coloured and interesting, the people were welcoming and friendly, from the hotel owners, to shop-keepers, street vendors to people just passing by in the street, everyone made you feel welcome and relaxed. El Fuerte was another place that we felt at ease and it didn’t take long to feel very much at home.

We had enjoyed such a relaxing time in El Fuerte, that we felt completely refreshed and ready to explore the Copper Canyon. What could go wrong with that plan? Well, aside from our embarrassingly near complete lack of useful maps…

Not a lot can be said to enhance the awesomeness of a surrealist sculpture garden in the jungle. So we’ll just launch straight into some photos.

END_OF_DOCUMENT_TOKEN_TO_BE_REPLACED

See also  Rocks, history and how not to navigate a colonial town

The main reason we stopped for 10 days in Arizona was so that we could drive up to Flagstaff to attend Overland Expo 2014.

For those who haven’t heard of Overland Expo (we hadn’t until we started planning this trip). It is a gathering of people who like to go adventuring in their vehicles. Whether those be 4WDs, motorbikes, or massive post-apocolyptic survival vehicles.

END_OF_DOCUMENT_TOKEN_TO_BE_REPLACED

Love the pictures! Looked like you saw a lot of the same buildings we did 🙂 Lucky you for getting to spend some time, our one night was not enough but never fear… we will be back!

Sure did! One night would not have been enough, I don’t think the five we spent in total were enough either, it is a great little town!

[…] For those who are interested, read on. For those who just want to see some pretty photos and read about our adventures, try this post about the start of our travels in mainland Mexico. […]

Emma for your imformation “Ways to make us feel old El Fuerte” The calculator/ adding machine is an Olivetti Prima 20 adding machine of late 60s /eary 70s and we had these here in NZ. Carry on with your hoiiday Im enjoying your Mexico adventures. Regards to you both Noel Martin ChCh

Thanks Noel, we’re pleased to report that we didn’t recognise that particular item in the museum!

[…] wore us down because we had enjoyed such a peaceful, relaxing time in El Fuerte and Álamos. These towns had all the charm that Mazatlán had promised with none of the hassle. […]

[…] is another of Mexico’s Pueblos Mágicos, the birthplace of the drink of the same name it felt like it would be wrong to visit Mexico […]