Some cheap airfares made it possible to take a pre-trip trip to Australia to catch up with friends and family and to have a bit of a break from work.

The first week of our trip was spent exploring Melbourne with our good friend Phillipa as our tour guide. We spent some of our time wandering around the central city, but also set aside a few days to visit some of the surrounding areas.

One of the main highlights of visiting Melbourne was the delicious food, we ate and drank (and then ate some more) each day and still feel like we hardly scratched the surface of the cuisine the area had on offer.

Wandering around the city itself, there was plenty to see, but probably best of all was all the street art. So many of Melbourne’s lane ways are thick with layers of paint as each artist has added their creations over the top of those of their predecessors. The recently cleared and repainted Hosier Lane is probably the most well known location for scoping out the street art of Melbourne, but pretty much any direction you turned there was something new to see. As we wandered around we noticed a lot of groups doing walking tours of the best street art locations. We were too stingy to pay for a tour ourselves and instead chose to take ourselves on our own ‘not-so-guided tour’, but judging by the number of other groups we ran into we still managed to find most of the best locations.

With so much to see in the centre of town it was surprising that we managed to pull ourselves away to explore some of the sights out of the city itself. But we were glad we did, the William Ricketts sanctuary in the Dandenongs was a tranquil spot, the beaches of Mornington Peninsular were the perfect place to be on a hot morning, the screaming of the cicadas in the Grampians rung in our ears for days afterwards and the Great Ocean Road lived up to its name.

We’d like to say a big thank you to Phillipa and Jaclyn for being super amazing hosts for the time we stayed with them—thanks guys!

Things have been pretty hectic with last-minute trip prep of late, but I decided it was well past time to start working through and publish some of the nearly written blog posts that have waited in the wings for a while. So here’s some more about Australia:

END_OF_DOCUMENT_TOKEN_TO_BE_REPLACED 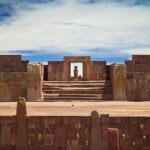